Arrival of Sisters at Corowa

On 17th January 1887, Mother Camillus and Sisters Angela, Evangelista and Celestine stepped from the train at Wahgunyah terminus on their way to take charge of St Mary’s School in Corowa. It will be recalled that the presbytery, built by Father Slattery in 1878, became the Convent when the Sisters of Mercy arrived in 1887.

Sister Angela – one of the original Sisters to come to Corowa in 1887 – died in 1896. She was formerly Miss Mary Gleeson.

Sister Evangelist was given the honour of ringing the school bell for the first time in 1887.

In 1889, the Corowa Sisters were Mother Camillus and Sisters Celestine, Lucy and Liguori.

In 1891, the Sisters were Mother Celestine, Sisters Malachy, Amalachi, and Euphrasia. 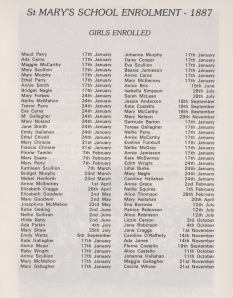