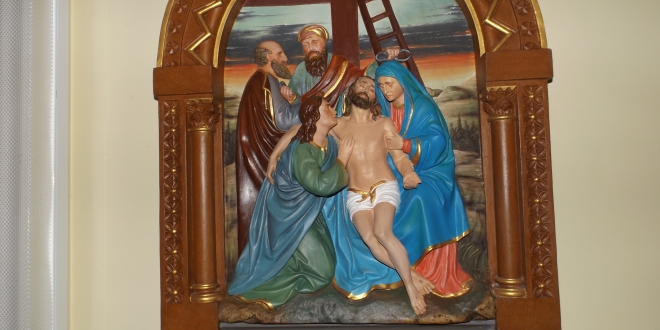 Unfortunately, it has not been possible to trace the names of the donors of the Stations of the Cross for St Mary’s. They were most probably installed early in the present church which was opened in November 1921. Our restorers assure us the Stations were made in Italy based on a mid-19th century design and shipped to Australia for our church.

Likewise, there are no available records about the cleaning or refurbishment of the Stations in the intervening years, although there is evidence that efforts were made to restore some pieces broken off the 3D images.

The Goubrans arrived in early January 2014, and for three weeks – amid a stultifying heatwave in the mid-40s Celsius – completed the work.

The Rosary in Arabic – A ‘First’ for St Mary’s

One afternoon, when the webmaster quietly entered to offer words of encouragement, he was surprised: Sam was at the rear of the church mixing paint while Mona was at the front of the church on the scaffolding repairing the First Station; they were talking.

But when I listened more carefully, I realised they were not talking to each other, they were praying the Rosary. Listening more carefully, I discovered it was not English. When they finished, I commented that I was delighted that their work was supported by prayer. Mona said they liked to pray in Arabic as it is their native tongue, and that it is easier for Sam than praying in English. They are Catholics from Egypt.

The photos presented here were taken on 8th March 2014. They are amateur and were taken with a flash which Mona objected to, because she felt the bright light distorted the natural effects of their hard labours. But the images are clear and sharp.

Each Station is presented twice, once capturing the whole scene, and then a focus on the figure or head of Jesus.

The Stations are presented as an invitation that you pray about Jesus’ sufferings. It also serves as a tribute to the good work of our two restorers, Mona and Sam. Each image can be enlarged by clicking on it – and clicking the ‘back’ arrow to return to normal.

If you have restoration work, contact Mona & Sam Goubran: art@creativearts.com.au