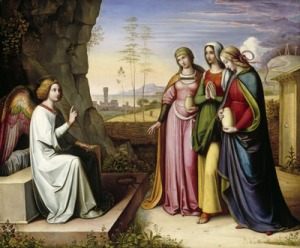 “…Why look among the dead for one who is alive?”

Thought for week: “Lord, let us search for you every day among the living.”

HAPPY EASTER! HE IS RISEN – SO SHALL WE RISE!

John and Arabella Crisfield were married in Chiltern in 1882 and in the same year came to Corowa. A blacksmith by trade, he set up in business and also practised as a veterinary surgeon. There were five sons in the family – Walter, William, Jack, James and Leo.

James followed in the footsteps of his father and became a veterinary surgeon, his territory being a large part of the Riverina and north-east Victoria. He married Eileen Regan and had one daughter, Mary (Mrs Fitzgibbon) who, with her family still resides in Corowa. Other descendants are John, Brian, Desmond and Ray, great-grandsons of the original John. [from AT Roddy The Church by the Rocky River 1978 Ch. 5, p.24] To be cont. 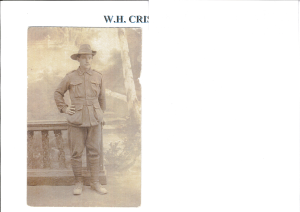 son of John & Arabella, born 6th May 1887, was  St Mary’s first ANZAC who died of wounds received in action at Gallipoli. Died in Alexandria, Egypt, 6th May 1915 – his 28th birthday. William’s name is engraved on the east face of the Corowa Monument. He belonged to the 7th Battalion of the Australian Infantry. [Notes from Mary Fitzgibbon, niece of William.]

9.00am Mass (For all Parishioners)

10am Mass of Anointing at Karinya (Pat & Kevin Seymour)

No Mass (Ordination in Wagga 10.am)